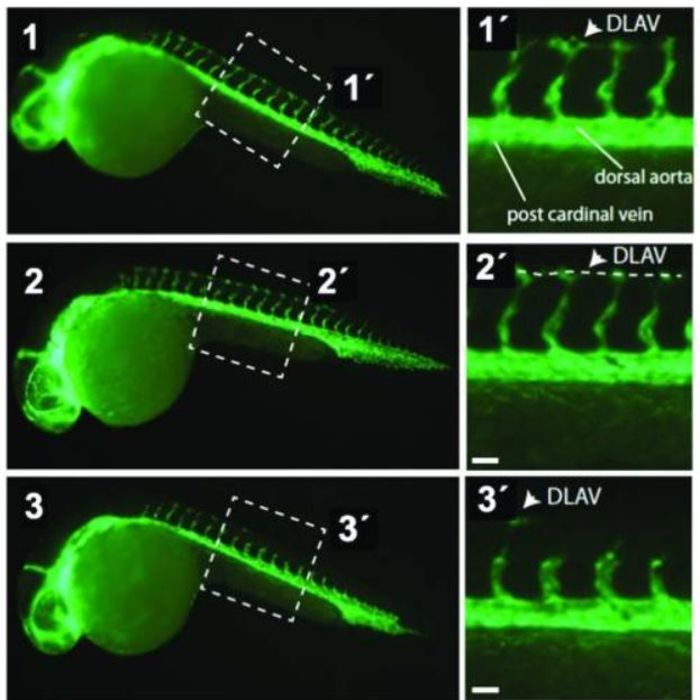 Birth defects, which are in part caused by exposure to environmental chemicals and pharmaceutical drugs, affect 1 in every 33 babies born in the United States each year. The current standard to screen drugs that affect embryonic development is based on prenatal animal testing; however, this approach yields low-throughput and limited mechanistic information regarding the biological pathways and potential adverse consequences in humans. To develop a screening platform for molecules that affect human embryonic development based on endothelial cells (ECs) derived from human pluripotent stem cells, we differentiated human pluripotent stem cells into embryonic ECs and induced their maturation under arterial flow conditions. These cells were then used to screen compounds that specifically affect embryonic vasculature. Using this platform, we have identified two compounds that have higher inhibitory effect in embryonic than postnatal ECs. One of them was fluphenazine (an antipsychotic), which inhibits calmodulin kinase II. The other compound was pyrrolopyrimidine (an antiinflammatory agent), which inhibits vascular endothelial growth factor receptor 2 (VEGFR2), decreases EC viability, induces an inflammatory response, and disrupts preformed vascular networks. The vascular effect of the pyrrolopyrimidine was further validated in prenatal vs. adult mouse ECs and in embryonic and adult zebrafish. We developed a platform based on human pluripotent stem cell-derived ECs for drug screening, which may open new avenues of research for the study and modulation of embryonic vasculature.